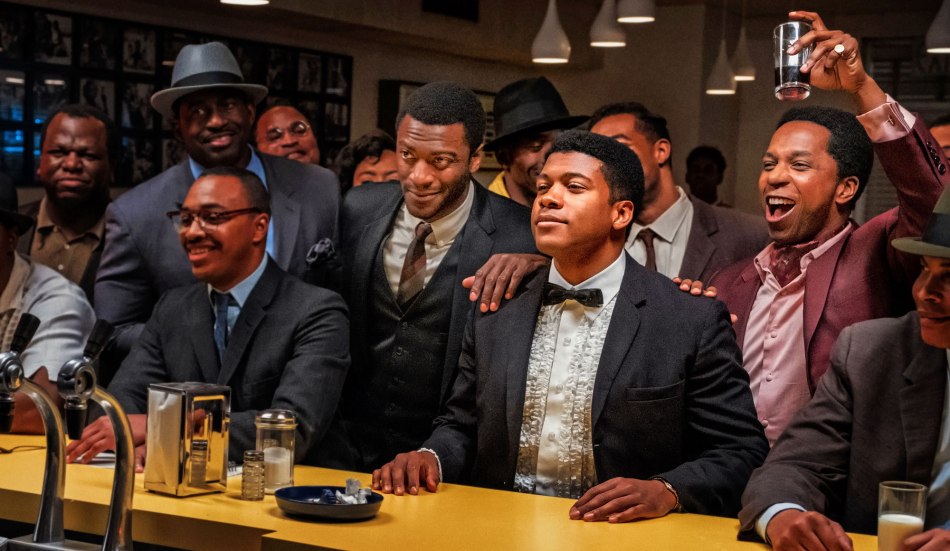 Regina King puts out a stunning drama as her directorial debut that will have movie lovers invested in the film’s success. One Night in Miami imagines a 1960s in which some of the most famous black Americans of that era are close friends. What if Malcolm X, Muhammad Ali, Sam Cooke and Jim Brown were friends in the 1960s?

The story takes place over the course of one night in February of 1964, after Cassius Clay (better known as Muhammad Ali) wins the heavyweight champion boxing title. Originally a stage play by Kemp Powers, One Night in Miami focuses around the 4 main characters gathered in Malcom X’s hotel room. Some are awaiting a party, but what’s really in store for them is a night of dialogue-heavy conversation about issues of social justice, friendship, allyship and activism.

Watching this film, you wouldn’t believe it is a directorial debut. Regina King’s experience in front of the camera in huge Hollywood pictures comes through as she perfectly frames her characters and shows the audience exactly what they’re supposed to see. In long monologue sequences, she tends to film either the person speaking or the person reacting in a way to pull you in and have you invested in the story and in the trajectory of the conversation. Most of the film takes place in a single location and is mostly centred around dialogue and conversation. In such cases, it can be difficult to keep an audience attentive and invested, but Regina King succeeds in the task. You never feel the film is dragging or getting stale. The ongoing conversation gets you thinking and reflecting enough about what message it’s trying to send to keep you engaged. In addition, the use of color and set design in this film has the audience completely transported to the 60s. While Regina King’s directorial vision is admirable, the story remains a stage play, which limits her in her ability to take big risks cinematically.

The tension and struggles of being a black man in America in the early 60s is perfectly incorporated in the film. Once the film settles into its core and the 4 friends are gathered in the hotel room, the conversation starts off light and airy just as you’d expect a conversation amongst friends to go. Soon after though, the conversation takes a more serious tone and shifts to more serious topics and concerns for the people in the room. Most of the initial tensions in the dialogue focuses on Malcolm X’s efforts in his fight and quest for social justice. Some of the initial conversation revolves around him having already convinced Cassius Clay to join him in the Nation of Islam and the discussion and debate that so ensues. One can assume that in a real-life context, a person debating such a drastic change in their life can feel doubt or uncertainty regarding their decision. The directing and writing of the film perfectly portrays that inner turmoil that Eli Goree’s character (Cassius Clay) is feeling.

In a few instances in the film, we see Malcolm X’s character looking outside his hotel room window to see two white men lingering around and staring at him. The unease and fear is perfectly framed and leaves the audience uncomfortable and worried for the well-being of the characters. This tension leads the conversation away from the religion topic and towards the inevitable issues of social justice. The debate that ensues is between Kingsley Ben-Adir’s (Malcolm X) and Leslie Odom Jr.’s (Sam Cooke) characters. The essential issue is that Malcolm X doesn’t believe that Sam Cooke is using his potential for the greater good of the black cause and to further the progress with social justice. This argument brings forth two performances that will surely go on to be on the best of 2020 lists for a lot of critics and viewers. Kingsley Ben-Adir and Leslie Odom Jr. perfectly capture the essence of their characters. Their performances start off subtle and mounts in explosiveness and power as the tension in the conversation rises.

Leslie Odom Jr. as Sam Cooke is a calming presence in the film. He is charming and relatable. He uses his talents to try and ease tensions between white and black people. On the flip side, Malcolm X does not believe that Sam Cooke is doing enough for black people and is instead spending his time cozying up to white people instead of defending his brothers and sisters of color. Kingsley Ben-Adir is subtle in his portrayal of the historical figure. When the argument between his and Odom’s character reaches his peak, he launches into a monologue where subtlety is thrown out the window and his full force and power as Malcolm X comes forward. His performance in this film will garner its fair share of praise and hopefully awards attention.

To cap it all off, you cannot have Tony award winning actor Leslie Odom Jr. in your movie without showcasing his talents. Leslie as Sam Cooke has quite a few singing scenes in the film. Each time, you are exposed to his immense charm and calmness. He helps you understand how music can have a true impact on people. The final scene showcases him embracing his unique position as a black person with influence over a large audience and has him finally singing one of the songs he has written exposing the social injustice issues he and other people of color are put through.

Overall an incredible directorial debut by Regina King with performances that elevate an already rich and solid script. Standout performance is that of Kingsley Ben-Adir as Malcolm X. Be ready to hear more about this film and that actor for the months to come. Already looking forward to rewatching this one.

Best Films of the Year… So Far